Showing posts from August, 2008
Show all

August 29, 2008
Yes I aspire to be a MythBuster, don't we all? For a while now there has been some concern over Apple's apparent lack of love for Java. Lately the debate has shifted over to the iPhone and the Java blogosphere is doing its best to send a message to Apple. While I am far from a supporter of the policies and practices of Apple, I do think they are right in determining Java as legacy or an anomaly on the web of 2008. A sniffing bot It turns out it's hard to find concrete evidence of how widespread the use of Java client technology is on the internet. What we can do however, is simulate a web user, randomly browsing around and taking note of how often we bump into Java. The first issue is, how can we come up with truly random URL's? Three different approaches comes to mind: Use some existing randomizer service Methodically run through IP ranges Screen scrape Google results I actually implemented all 3. Of those both item 2 and 3 potentially raises some ethical questi
4 comments
Read more 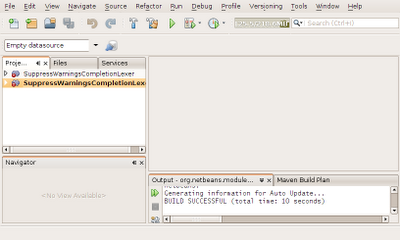 In the post from yesterday I was a little harsh regarding the performance of recent NetBeans versions, which seems to have taken a toll for the worse. One of the most annoying things is how much scanning and processing is going on all the time which harms responsiveness and the overall user experience. The NetBeans mailing list yielded responses like "more features requires more work" which is fair enough. However, I decided I wanted to have my cake (speed) and eat it too (features). Memory mapping to the rescue It's not exactly new. So called "RAM drives" have been used for ages to speed things up, some Linux distro's even mount the temporary files location into RAM to improve performance. We can do the same to our source checkouts to gain massive increase in throughput as well as access time. There are two easy ways to archive this out of the (Linux) box, mount a dedicated RAM drive or use the TMPFS filesystem . Sorry, Windows users will have to look e
14 comments
Read more

August 20, 2008
NetBeans Pretty Much Unusable If you care about NetBeans and its performance, an interesting development occurred over the last 24h on the nbusers mailinglist. It seems the upcoming 6.5 release sparked a debate claiming that it's pretty much unusable . While I wouldn't go that far, there is actually some truth to the matter as experienced by my colleagues and I. A little bit of history I've been back and forth between various IDE's over the years, coming from Visual Studio (VB/C/C#) I've been rather spoiled in regard to syntax highlighting, code completion and debugging. In fact I remember back in 2001 how I was convinced into doing a college project in Java, primarily because of the assistance offered by Visual Studio J++. At that time, no tool provided these kind of features (although Forte and JBuilder tried). In this day and age, things looks quite different of course. SUN finally realized that it's worth having great tools (some would argue they have to
1 comment
Read more

August 15, 2008
So I have been learning JSF and JPA at work recently. While I can't say those are the most exciting technologies to me, at least they appear to be (or become) de-facto standards and that means more leverage over the long term (something not always the case when dealing with Java technologies). Using JSF with Facelets can be a little challenging, the tools are only so-so and frankly it bugs me to have to type so much type-unsafe stuff in XML, EL and annotations. Anyway, what this blog entry is about is how you can bridge the gab between JSF page rendering and binary content delivery. JSF and PDF Corporate applications often need to deliver a lot of PDF content, and it is no different where I work. Static PDF documents as well as dynamic ones. Even if frames and iframes are generally frowned upon these days, I find then to be the best way to embed PDF documents inside the browser. However, with JSF you can't just make an xhtml page and expect to be able to stream binary content
3 comments
Read more
More posts