Showing posts from September, 2010
Show all

My issues with Spring 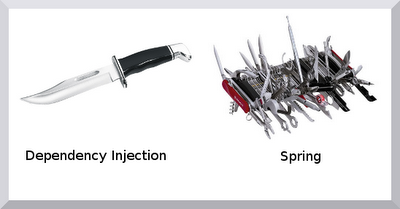 One of the things I've had to come to turns with as a professional Java developer, is navigating the massive chaos of frameworks out there. It doesn't really matter which corner of the development stack we're talking, in Java we're sure there won't ever be just one official standard; if we're lucky, we can identify a state-of-the-art de-facto standard and if we're *truly* lucky, our choice will remain a good one for longer than a few years. One of those de-facto standards appears to be Spring . There is little doubt, that IoC ( Inversion of Control ), or more specifically DI ( Dependency Injection ), can be a great tool to decouple concrete dependency layers. However, in my opinion Spring introduces just as many problems as it solves, and here's my take on why. Everything and a Kitchen Sink While Spring does address IoC/DI, it also does a gazillion other things as well - as evident by looking at the Spring maven repo . On one of the project I was on,
15 comments
Read more
More posts