How to pimp a greenhouse

August 25, 2013
My wife got a luxury greenhouse this spring and while I certainly enjoy the crops coming out of it, it's not exactly aligned with my own geeky hobbies. While unfortunately it's not in the cards for me to invest in a solar system generating green electricity for my entire household, I *can* at least construct a system for a 14m2 greenhouse. The goal is to build an off-grid system for lighting the greenhouse at night using energy provided by the sun in the day, as cheaply as possible.

There are many small solar system packages complete with panel, charger and battery; but the price typically starts up around US$200 and that's without the light. For me, part of the fun in something like this, is doing it yourself with cheap COTS components. After some browsing around, ordering and waiting for things to arrive, I ended up with the following: 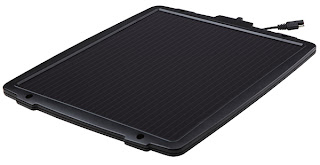 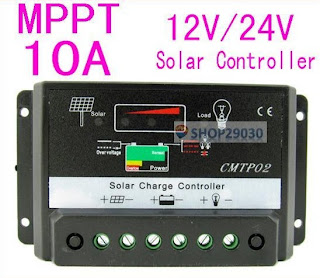 No-name Chinese 10A MPPT charge controller from ebay (US$10). 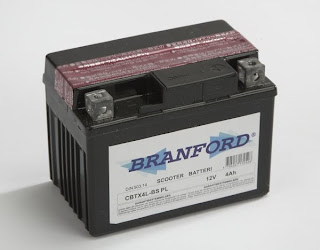 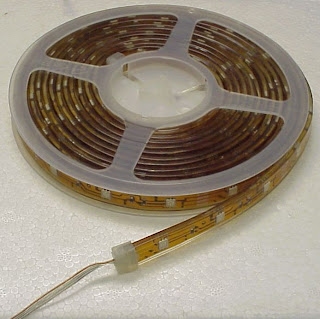 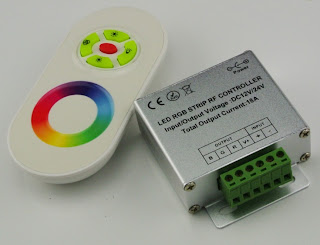 
Lots of things were in the open here. Perhaps the panels would not be good enough to charge the battery, perhaps the charge controller did not really use MPPT, perhaps the battery would not be large enough to hold the power needed by the LED's etc. While I did some preliminary calculations, in practice things might not always pan out the way you think, so I bought the parts primarily because they were cheap and would appear to do the trick - I figure I could always improve insufficient aspects later on. Total cost landed around US$120 - not too bad at all.

I received the charge controller about 10 days after ordering, which is pretty typical from China to Denmark. It felt really light and cheap, so I popped the hood to take a look at it inside. 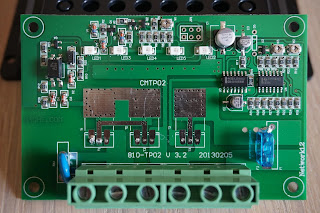 Ok well, we're not seeing any sign of inductors for the DC-DC step. I think I see a quad op-amp (battery level monitoring?), some Schmitt triggers (hysteresis?), 3 noname power FET's (chargers), a few transistors and a bunch of discrete components - but definitely nothing to convince me this is an MPPT charger. This was confirmed by measuring the voltage over a connected panel, noticing that the voltage got pulled down to that of the battery, *not* kept at the maximum power-point which I determined manually to be around 18V. 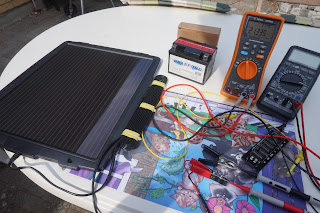 Had I payed more for the device, I might have been disappointed, but at US$10, even a naive PWM charger is a good deal. The charger is rated for 10A, but I will barely be pushing 1A, so the circuit won't be particular stressed at all.

At maximum current draw (white color, all LED's turned on), the 2m LED strip consumes 0.7A/8.4W, and with a single color lit, it consumes 0.4A/4.8W (on average since blue uses more than green which uses more than red) so I chose to test the battery by putting a dummy load on using a computerized RC charge/discharge controller I had laying around. 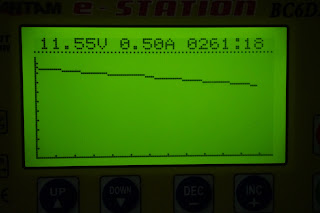 It's worth nothing, that the battery was not actually full when I started this test, I had probably discharged it some 10%. With that in mind, the relatively small 4Ah battery still manages to provide 4½h of 500mA before it drops below 11.5V - which represents a relatively deep discharge cycle down to around 40% with 1.7Ah left. That should be good enough for the LED lighting to last all evening. The charge controller draws just 15mA when idling (not charging nor discharging the battery) so that shouldn't be a problem either.

Using some spare aluminum bands, I constructed an element that fits perfectly between two of the support rods of the greenhouse. 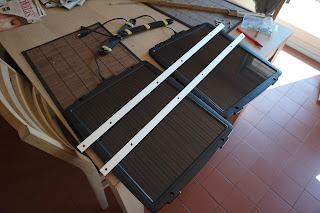 During the construction, I tried using various sized wires and actually came short of some decent 4-pole wire with enough copper to conduct the current without too great a loss in the wire. My original idea was to have controllers and battery some 2-3 meters away from the solar panels and LED light, but that would've resulted in about 1W being dissipated in the wires. So instead, I attached the LED driver and the charge controller directly to the back of the constructed element, losing an order of magnitude less power. The battery I hung in an aluminum band, which got bend to clamp perfectly around the battery and hold it firmly in place. I also left space for a second battery which I might add if capacity becomes an issue. 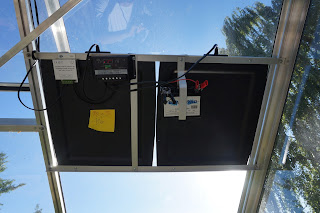 After placing the 2m LED strip to the rim of the ceiling using the adhesive tape on the back, it was time to light it up. Apart from a small mix-up between two of the colors, everything worked perfectly. However, it was not until nighttime it truly came to its right. 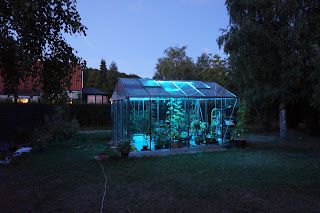 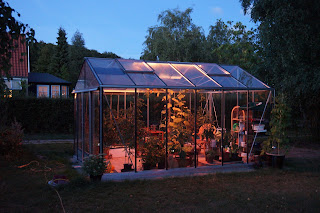 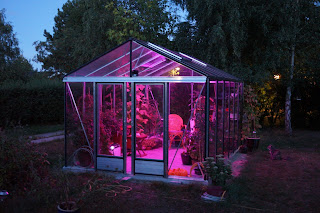 Admittedly, some of the colors can look a bit corny and signal "red light district", but toned down a bit it adds to a very cozy ambiance in the yard at night - I'm especially fond of the warm-yellow/orange and green/teal glow. Of course, it can also do plain white. With the brightness seen in the above pictures, the LED tape uses about 0.5A/6W. It's a testament to the efficiency of LED lighting, that I worry if it's too bright late at night, but I will have to wait and see whether the neighbors complain or not. ;)

I've learned, that when playing around 12V systems with currents approaching 1A, keeping wires short (or using excessively thick ones) seems paramount for efficiency. It would've been nice if I could have afforded the Philips Hue system, which can be controlled from any smartphone and is hackable to do cool things like adapting the brightness to the time of the day, flash blue when there's a Facebook message etc., but I really find this Philips product too expensive for what it is, so chose the cheap approach instead. At a mere US$120 I am more than happy with the solution and so is the wife btw. Time will tell if I need a better panel (30W mono panel can be had cheap on ebay) or an extra battery. One obvious improvement I will probably look into, is adding a dusk-relay, to ensure the LED strip can only be lit when it's dark enough, to prevent the LED's from stealing juice from the solar panels during the daily charge cycle.

After a few days of testing, everything continues to work as intended. The greenhouse is typically lit from around 21:00 when it starts to get dark, to midnight. If I were to guess, I'd say the LED could stay on most of the night, but have yet to actually try this (and thus, test the load cut-off feature). Interestingly, on a late-summer day at the end of august, the system seems to stop charging in the early afternoon where it reaches 13.25V. This is promising, as it suggests being able to catch up on more gloomier days, but over a longer period. 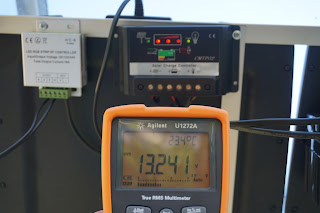