October 06, 2013
So I recently purchased a used car. It's in pretty good condition, but the master key with it's remote lock/unlock functionality, had seen better days - in fact, it could only unlock, not lock. 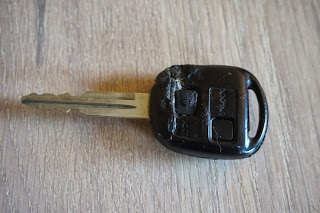 Apparently these keys can't just be cloned so the car dealers have to install an entirely new key system which will cost in excess of US$500. Not having anything to loose, I set out to try and fix the key instead. 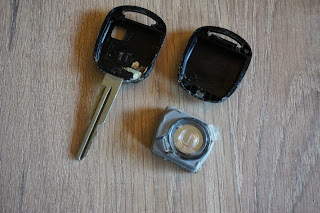 The key looked like it had been chewed on by a dog or something, and then attempted fixed by melting the plastic and adding some epoxy. I took it apart and located a small plastic container housing the electronics and battery. 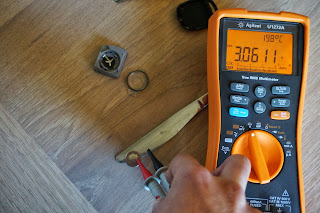 The lithium battery seemed in fine condition, considering it was some 8 years old. 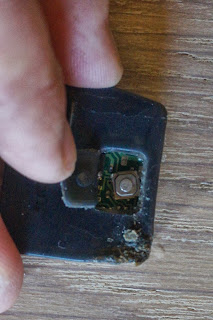 With a scalpel, I cut open the rubber membrane around the button to get to what was underneath. To my surprise, there was a little button loose in there - so it was pretty obvious why it did not work! 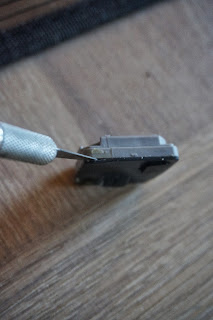 Obviously I would not be able to solder anything this tiny, with the rubber membrane in place, so it had to come off. 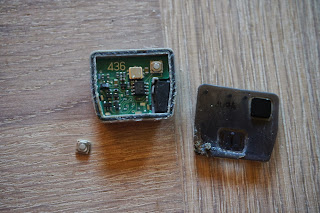 With the membrane cut off, the small board and the tiny button were revealed. I see a 433.94 xtal, so it obviously uses the ISM band. The IC is a HCS361 which is interesting to read about. I have never seen such a tiny button before, with SMD contact soldering terminals around 1/2 mm. in size, so this was a challenge. Thankfully, I had a brand new pointy soldering iron tip. First I tagged the button in place under a magnifier, with a bit of glue on a needle. This way, there was less of a risk pushing the button out of alignment with a large, clunky soldering iron tip. With the temperature control of my cheap soldering iron turned up as high as possible, I carefully added a tiny drop of tin on the tip, and touched the four terminals between the board and the button. 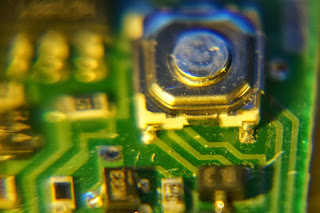 One terminal had to be redone, but otherwise a visual inspection under the magnifier revealed a nice solid solder. The true test of the fix however, was obviously to put the battery in and try out the mechanism - thankfully, everything now seemed to be working! The electronics could be repaired, however there was no hope for the physical key parts. As an avid user of ebay, I had a peek in their global store repository and lo and behold, I found both a compatible Toyota plastic key house replacement and some matching rubber membranes, for about £10. 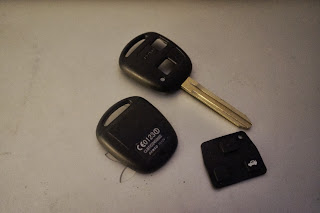 The ebay parts arrived from Spain after about a week so it was time to assemble the electronics with these new parts. 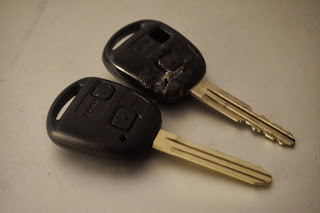 Assembly went super easy, all I had to do was to cut out the trunk button from the rubber membrane, which was not applicable to my car nor key.

All that's left to do now, is to go to a locksmith and have the key cut according to the old master. My already good car deal just got even better! :) Lesson of this experience; sometimes it pays to question status quo and dare to take things apart!